After rejoining a year ago the FOKUS umbrella organization (Forum for Women and Development), our Friends of UPLIFT women’s committee have felt the need to enhance the gender profile. To accommodate their request, last month a new Friends of UPLIFT info/business card was produced, its ‘logo’ design as well as reverse side text updated.
So, to help attract some new members and potential donations, you may request us to send by post a few cards – or a small batch (as a parcel with pricey postage!) to share within a group. Full postal address, please! 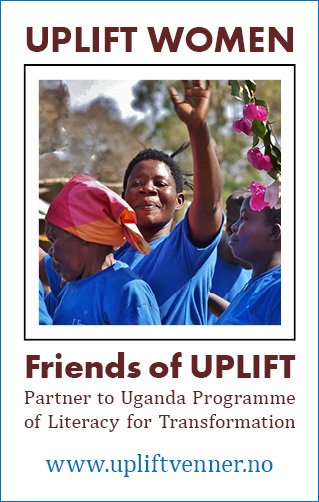 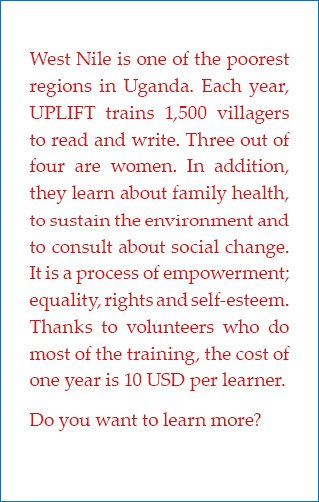 UPLIFT and the Global Goals for Sustainable Development

For those of us who have chosen to support UPLIFT, which appears to be a mere dot on the map of Africa, it is nevertheless encouraging to read about the UN global goals for development (SDG – Sustainable Development Goals). As heir to the Millennium Development Goals these are to be the world community’s new road map for the next 15 years, until 2030. This time the goals are global, not only limited to those nations defined as developing countries. When we know that UPLIFT has carried out its activities the past 15 years in line with the first Millennium Development Goals, it is of interest to compare current activities with the new SDG’s.
Among the 5 first main goals, 3 of them – No Poverty / Quality Education / Gender Equality – make up the over-arching goals of UPLIFT. Indeed, they justify UPLIFT’s continued existence.
Read the full newsletter:
April 2015

"Certificate" - a source of pride and selfconfidence

Last week-end we received a special greeting from Nebbi which we have been waiting to include in this letter. After the shining results of the year 2014 learners, referred in the February letter, we thought it might be of interest to share an example of the written examination! Some may have wondered how reading and writing skills are being assessed and knowledge of life improvement is evaluated in order for a learner to pass the exam. The issue of a ‘certificate’ is a source of pride and selfconfidence which we who take reading and writing for granted can hardly imagine.
You may imagine, however, that it takes a while for the desired example to find its way into this letter. First, locate one locally (Nebbi), then translate it in English from Alur, before sending it by bus to be picked up by Mark from the driver in Kampala, so that he may scan and send the ‘document’. 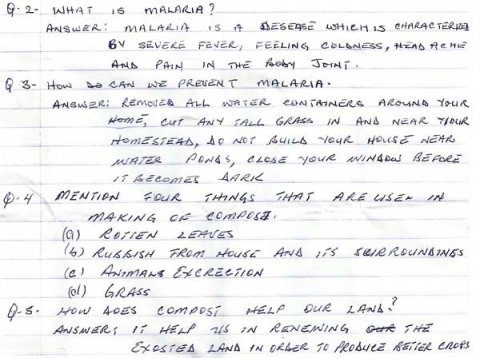 Read the exampaper here:
The way it works, then, is that the understanding and use of the writing may at the same time demonstrate the practical relevance for self and community. (‘Devel’pment’, by the way, is one of the first English concepts one learns in Uganda). This integrated training is a main key to the successful results of the UPLIFT learners. An example from an earlier year’s exam questions relates to the role of prayer and work in daily life. Even with short questions and answers the subject matter reveals a fairly advanced language skill for a ‘primary’ (P4?) pupil – achieved in less than a year. For a ‘refresher’, let us refer to the description by Dr. Hizzaya of the second key– a syllabic alphabet –in the 2014 June letter. 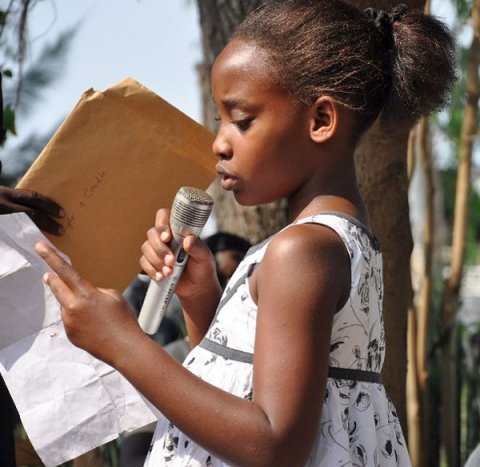 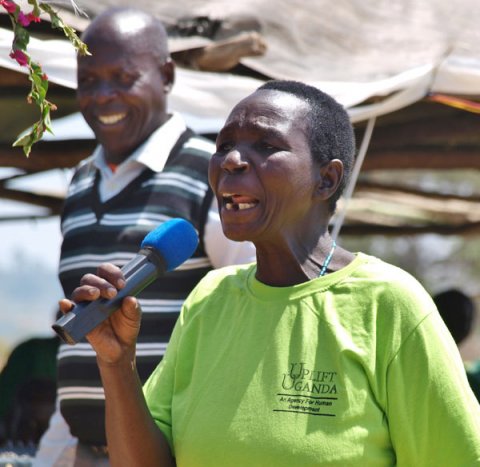 With a young role model, an old woman now speaks in public

Picture this: A newly formed sub-county, Ndéwu, becomes a player. Eight villages join forces to host the game. One thousand seven hundred and fifty participants (if not all present) ‘line up’. Twice that number gather for the festivities. Troupes counting some 120 dancers, singers and musicians from all learners’ communities in 2014 vie with each other in the build-up to the moment of victory, when the UPLIFT Cup is to be awarded the sub-county with the highest literacy examination score. The suspense is tangible. The Cup is lifted. Mark Ssemukasa reads out loud: “And the winner is: ...NDEWU!” 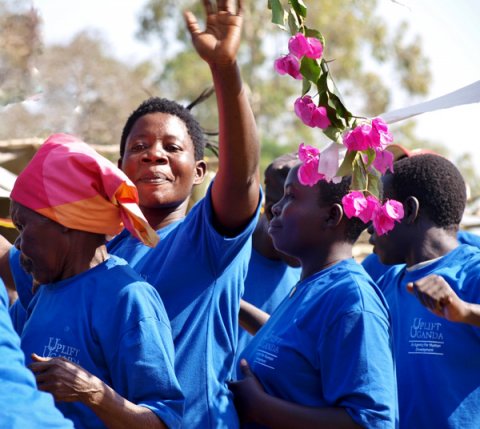 It goes without saying, African dance is a powerful way of expressing togetherness, joy and pride – in one word: Celebration. But with the announcement of this year’s result, just as a troupe from the hosting sub-county had finished their performance in front of the guests of honour, songs and dance steps and elbow-and-hip shaking all fell short of adequate expression. Quite devoid of rhythm, the screaming winners threw themselves about, like calves let out of the barn in spring [after a Norwegian winter], others rolling on the ground, one running off with arms flailing, like a half-crazed footballer after scoring. The chaos of movement and sound made the man with the microphone tie his tongue for a long interval in the proceedings. The applauding audience was readily caught into the mood, while the few who had dozed off after the three-hour ceremony and too many long and fully translated speeches were left slumped in their chairs, with tentative smiles and dawning discovery of what was actually going on. 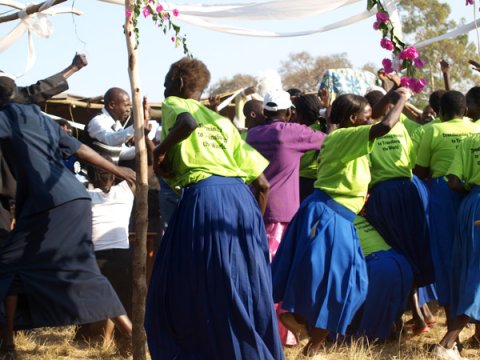 For a moment, displaying the ‘other side’ of being now literate:
Uninhibited joy, bordering on chaos!

It was truly a moment of victory for all; learners, mentors, and coordinators, and once more, for UPLIFT. No one would have expected the 2014 batch to surpass the preceding year’s all-time record. But this time, out of the 1.756 learners enrolled, only 2 dropped out (and one died) while 1.753 completed the full 9-month course! Of the 1.748 learners who sat for exams (a record of nearly 100 %), 1.681 (96 %!) graduated with certificates.* Enough to make even a biased supporter suspicious, we have asked this time to have translated from alur a representative exam paper, questions and answers and all..! 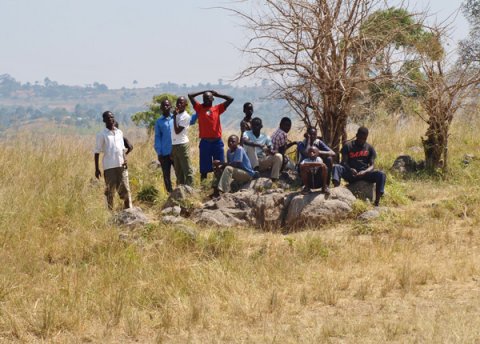 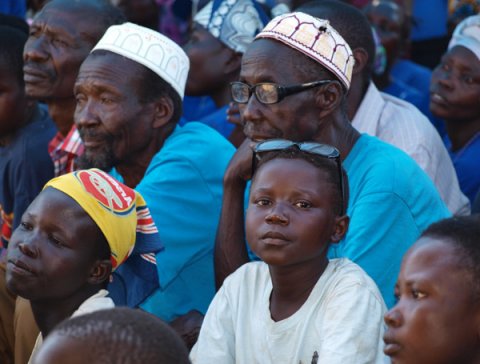 Listeners, in the periphery – and spectators young and old, close up. 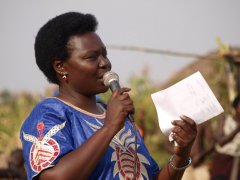 ”I would like to thank you for coming to Zombo District for the graduation of the Uplift learners. I thank you very much for your support and a future and confidence you have built in our people thru the Uplift programme. More than ever before, we now need to link the learners to practical activities that can improve their socioeconomic life - agric, health care, income generation, etc. It was nice interacting with you and we look forward to more interaction, God willing, in the near future.
May God bless you and your team abundantly.
Kind regards,
Kwiyucwiny Grace Freedom
Member of Parliament for Zombo District

Letters to
Friends of UPLIFT (PDF)